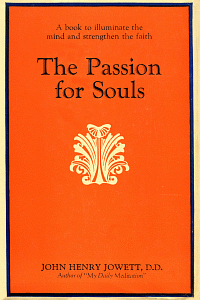 The Passion for Souls examines seven aspects of a disciple's passion for human souls:

Beginning each section with a scripture, Mr. Jowett then expounds on the the Word and draws in examples from everyday life and the history of Christian saints. This volume shows Mr. Jowett’s keen, reverent insight at its best.