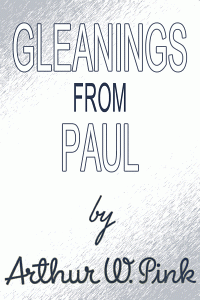 Look Inside
Gleanings from Paul
The Prayers of the Apostle
By: Arthur Walkington Pink (Author)
Publisher: Wordsearch
Category: Study Helps

Gleanings from Paul is a rich source for gaining insight into the subject of God-honoring prayer. Paul's many prayers scattered throughout his letters are among the richest sources in all of Scripture. Pink's detailed study captures the essence of the apostle's concern for the congregations on whose behalf he consistently prayed. However, this work is much more than a mere study of Paul's prayers. Pink's insights help to gain a more rounded understanding of the apostle himself, the God he served, and the churches with which he worked.

Don't waste your time reading Barth and Brunner. You will get nothing from them to aid with preaching. Read Pink.