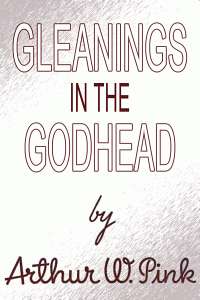 Here is a remarkable collection of studies about God, particularly dealing with His attributes and the person and work of Christ. Though the studies are not designed to be a comprehensive or systematic treatment of the doctrine of God, they are wide-ranging, meaningful, and beautifully written.

As in all of Arthur Pink's writings, God is the central concern - not simply as the special subject of study but even more importantly as the object of honor and worship. Above all, God is God.

Yet, Gleanings in the Godhead is intensely practical in the best sense. Man has no way of discovering himself- either who he is or who he ought to be- until he discovers God. Every page of this volume helps us to see God more clearly and ourselves more truly.