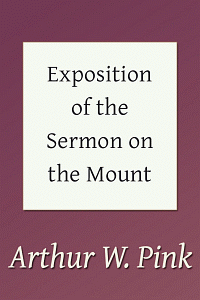 Look Inside
An Exposition of the Sermon on the Mount
By: Arthur Walkington Pink (Author)
Publisher: Wordsearch
Category: Study Helps

In this Exposition of the Sermon on the Mount, Pink provides the student of God's Word with background information for the whole of the Gospel of Matthew and specifically for Christ's great sermon within it. Pink notes that the Old Testament prophets proclaimed a Messiah who would fulfill the law. He then demonstrates how Christ reveals the intentions of the law in the Sermon on the Mount and fulfills them. The work is insightful, easy-to-read, and helpful for obtaining a fuller understanding of Christ's purpose and work.

A thorough exposition containing an abundance of practical material.