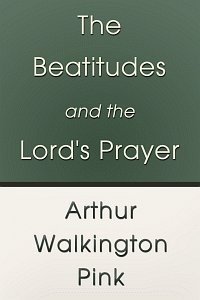 In The Beatitudes and the Lord's Prayer, A.W. Pink provides us with an introductory study to the path of blessing and pattern of prayer taught us by the Lord. In the Beatitudes, Pink notes that Christ spoke to believers and non-believers alike and tells us much about the Kingdom of God. In studying the Lord's Prayer, Pink eloquently presents us with basic, but often overlooked, observations from the text -

Both studies are likely to be helpful for students, pastors, and teachers of God's Word.