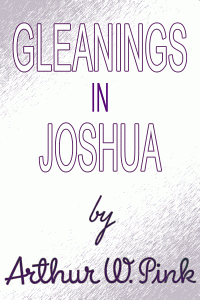 Joshua, the capstone to the books of Moses and the foundations of those that follow, is an extremely important and fascinating study. These lessons were some of the last expositions to come from the gifted pen of the late Arthur W. Pink. They were originally published in Studies in the Scriptures, of which Mr. Pink was publisher and editor.