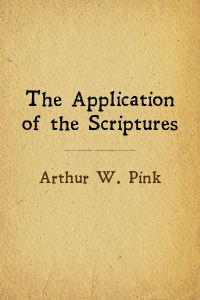 Look Inside
The Application Of The Scriptures
A Biblical Refutation of Dispensationalism
By: Arthur Walkington Pink (Author)
Publisher: Wordsearch
Category: Theology

The Application of the Scriptures originally appeared as a series of five articles in Pink's Studies of the Scriptures in June through October 1952. In these articles, Pink presents a simple and scriptural argument against the system of teaching known as dispensationalism.