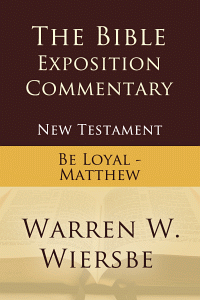 Matthew's gospel focuses on the Kingship of Christ—that Jesus is Lord of Lords, the Messiah, the One promised by the prophets of old. But a king is not born in a manger, to a virgin peasant, and a king is definitely not executed on a Roman cross, is he? Actually, that's exactly the type of King God sent to the world.

While the Jews were looking for a political king to save them from Roman oppression, God sent them and the rest of the world a different type of Savior—one that would reconcile God's people to himself, once for all.

Pastor, author, and Bible teacher Warren Wiersbe highlights significant cultural and historical aspects that arise in Matthew's gospel to paint for readers a clearer picture of this glorious, unexpected, but all-satisfying King of Kings.