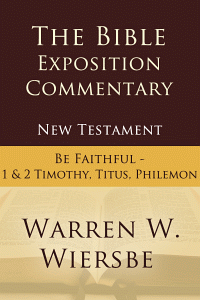 In a fast-paced, technology-based era when drive-thrus, cell phones, laptops, and Internet banking are the norm, it's sometimes hard to fathom that God doesn't appreciate our frail attempts at spiritual shortcuts.

Through the pastoral epistles, 1 and 2 Timothy and Titus, with insight from Paul's letter to Philemon as well, Dr. Warren W. Wiersbe illustrates that working for God's Kingdom requires tenacity, never-ceasing prayer, and protective battle gear that only God can provide.

In this commentary, you'll grasp the imminent danger of false teachers and, thus, the overwhelming need for godly ministers—people who preach, practice, and progress in the Word. By explaining how a healthy body of believers should operate, Wiersbe uses Paul's words to encourage today's church to stay the course and be faithful!