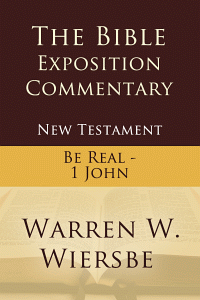 ”Like a child eating cotton-candy at the circus, many people who expect to bite into something real end up with a mouthful of nothing. They waste priceless years on empty substitutes for reality.“ Through clever word pictures like this that strike the reader with their simple truth, acclaimed best-selling author and former pastor Warren Wiersbe shares priceless unchanging realities as he opens up the book of 1 John.

Though Be Real is originally copyrighted in 1972, Wiersbe's text is as enchantingly timeless as the truths in the Bible itself! His humor is witty, his research is extensive, his historical context is deep, and his commentary is solidly based on the Word of God. In fact, the “Word was with God, and the Word was God” (John 1:1) is the crux upon which he builds to explain the manifestation of a perfect, holy Supreme Being to this hurting world of finite sinners. Heaven blesses earth and the Divine Creator becomes one of the created in this personal and/or group study that you will not soon forget.