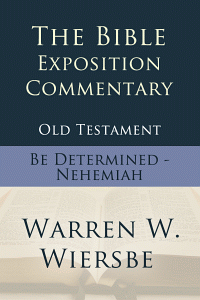 Best-selling author Warren Wiersbe unwraps the book of Nehemiah in his study Be Determined to show a servant so selfless, a mission so humbling, and a perseverance so admirable that Christians are drawn to a new awe of God. As the leader God calls to mobilize and equip His people to rebuild the walls of Jerusalem, Nehemiah was a man who didn't know the word no when it came to God's economy.

God strategically summons the man of Jewish descent from his comfortable high position as Artexerxes' cupbearer at the palace in Persia to the difficult role as leader of the Jewish remnant. To this remnant of his own people, Nehemiah is called to empathize and share God's plan for their physical, emotional, and spiritual reconstruction. If open to it, readers will hear the Holy Spirit's direction in their own lives, and will surrender themselves to the God who equips them to do all things through His infinite strength.