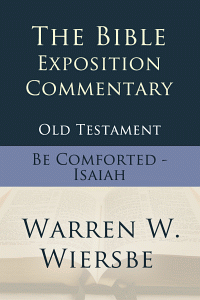 For anyone who thinks that comfort is equivalent to pity and that it is only priceless to those who need an emotional crutch, best-selling author Warren Wiersbe applies the words of the prophet Isaiah to prove that God's comfort is no such thing. The word comfort actually translates “to repent” in Hebrew; our English translation, however, adds another dimension to the word since it originated from two Latin words meaning “with strength.”

With definitions and insights like this, the “pastor of pastors” and phenomenal author Warren Wiersbe continues to enliven the Scriptures as he weaves the words of Isaiah with historical explanations and thought-provoking questions for every chapter, creating a study guide that can be used in personal Bible study or with a group. With over 4 million copies of his Be series alone in circulation, he is a man who has given his life to a deep examination of the Word of God, to communicating it in such a way that the masses see its relevance for today.