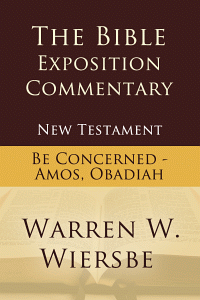 “It is necessary only for the good man [or woman] to do nothing for evil to triumph.” —Edmund Burke

It is certainly true today that the “Do Nothings” outnumber “The Company of the Concerned,&lrquo which in part explains why society is so confused and frightened. It's time for God's people to be concerned!

Meet some concerned believers who made a difference in their time and who show you how to make a difference in your time: Amos, the “farmer preacher” who understood the times better than the scholars and who dared to stand for God's truth against the highest officials in the nation; and Obadiah, the prophet who explained why longstanding family feuds ultimately bring defeat and disgrace.

Join God's “faithful remnant” and dare to be different!

All of Dr. Warren Wiersbe's popular Be books are available to WORDsearch customers!