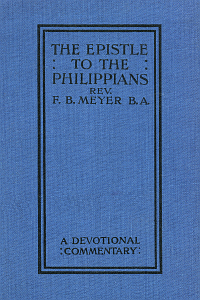 Look Inside
The Epistle to the Philippians
A Devotional Commentary
By: Frederick Brotherton Meyer (Author)
Publisher: Wordsearch
Category: Commentaries

In this devotional Meyers does not attempt merely to write something critical or exegetical; but has endeavored honestly to ascertain the meaning of the Apostle. Meyers acknowledges that when we bear in mind all the explanation, expansion, application, and enforcement which the epistle to the Philippians has received in the course of centuries we are still in need of Divine intervention to even comprehend the smallest of its meaning. Included are these chapter titles:

During his long and fruitful life, he preached more than 16,000 sermons. Said one author: “The phrasing of Meyer's sermons was simple and direct; he polished his discourses as an artist polishes a perfect stone. There was always a glowing imagery in his words; his speech was pastoral, lovely as an English valley washed in sunlight…In his day, great wars raged. Those who went to hear him forgot the battles.”

Dr. F. B. Meyer is one of the great preachers of a past generation