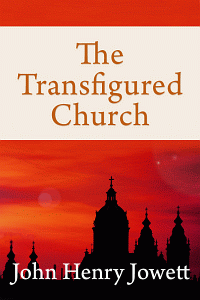 The day of Pentecost changed the Church forever. The Holy Spirit filled and empowered the people there so radically that the ripples were felt far beyond the confines of that holy space.

Thousands of years later J. H. Jowett poses questions in The Transfigured Church, like, “Is the modern Church the centre of similar interest and wonder? Is there any awed and mesmeric rumour breathing through the streets, stirring the indifferent heart into eager questioning? The modern Church claims immediate kinship and direct vital lineage with that primitive fellowship in the upper room. Does she manifest the power of the early Church? Does she reveal the same magnetic influence and constraint?”

He addresses this and other subjects in the following work. A few chapter titles include: