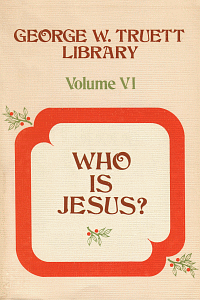 These fourteen sermons all deal with the Person, the Mission, and the Message of Jesus Christ - themes that were ever central in the ministry of Dr. George W. Truett. The question asked in the title of the first sermon, Who is Jesus?, finds answer and abundant illustration in the messages herein. Faith is the color and character of each of these sermons on the Lord Jesus Christ.

A few of the fourteen addresses in this volume include: