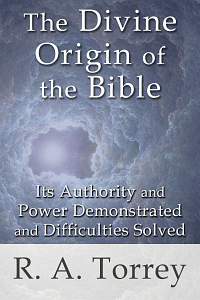 Look Inside
The Divine Origin of the Bible
Its Authority and Power Demonstrated and Difficulties Solved
By: Ruben Archer Torrey (Author)
Publisher: Wordsearch
Category: Theology

The fundamental question in theology is, “Is the Bible from God, and of absolute authority in faith and practice?” If we heartily answer in the affirmative, we have a starting point from which we may seek truth. If we are not persuaded of this, then we are as one drifting at sea.

The author of this book doubted that the Bible had any divine authority, but he was determined to study it with an unbiased viewpoint until he reached his own conclusions. Afterwards, he claimed with absolute confidence the divine origin, authority, and power of the Book.

It is impossible to put all the reasons for that confidence into a limited number of words; but some of the reasons that will appeal to those with common sense are given in the book, with the hope that they will bring to others the joy and blessing the writer himself enjoyed after having crossed from darkness into light.

About the Editor
Ruben Archer Torrey was born in Hoboken, New Jersey in 1856. Torrey graduated from Yale University and Yale Divinity School and studied at the universities of Leipsic and Erlangen. He was pastor of the Congregational Church, Garretsville (1878-82); Open Door Church, Minneapolis (1883-86); superintendent of the Minneapolis City Missionary Society (1886-89); pastor of People's Church, Minneapolis (1887-89); superintendent of Chicago Evangelization Society and Moody Bible Institute (1889-1908), having meanwhile been pastor of the Chicago Avenue Church, Chicago (1894-1905).