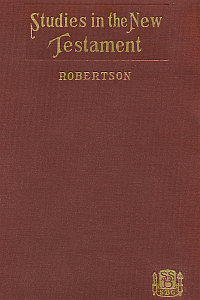 The aim of A. T. Robertson's classic Studies in the New Testament is to make the New Testament more intelligible and more easily taught to others. The book is not meant for technical scholars or students in theological seminaries. Instead, Robertson writes to the average teacher in the Sunday school, the adult Bible class, boys and girls in the high schools, those in their first year or so of college, and preachers with little scholastic training. With its "Topics for Review" and "Questions for Review and Examination," it is adapted for use in Sunday school and Bible institutes and in all teacher-training work. There are no references to books of any kind outside of the Bible. The chapters are divided into numerous paragraphs, each paragraph dealing with a single idea.