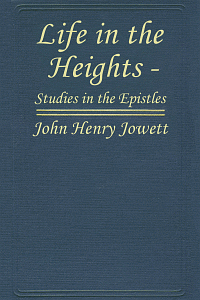 Look Inside
Life in the Heights
Studies in the Epistles
By: John Henry Jowett (Author)
Publisher: Wordsearch
Category: Study Helps

In Life in Heights, Jowett provides his readers with a short text from Scripture and an accompanying exposition. In Jowett's usual encouraging style, he exhorts believers to walk by faith, keep their eyes on things unseen, and to fight the good fight. Over 60 entries will provide believers with godly thoughts to begin or end their day. Included are these titles: