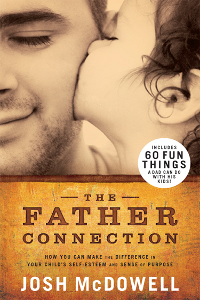 Look Inside
The Father Connection
How You Can Make the Difference in Your Child's Self-Esteem and Sense of Purpose
By: Josh McDowell (Author)
Publisher: B&H Publishing Group
Category: Literature, Parenting

“As a young father I was running scared . . . I feared the culture would capture my kids . . . but I figured if I could find the ultimate model of fatherhood and then emulate that model, I had a fighting chance.” Updated and redesigned for a new generation of dads, Josh McDowell’s ECPA Gold Medallion Award winner The Father Connection looks at ten parenting qualities inspired by the ultimate model of fatherhood. Embracing these godly characteristics will make all the difference in a child, boosting self-esteem and sense of purpose, helping him or her to: • Feel loved and secure
• Develop a reputation of integrity
• Know their dad keeps his promises
• Stand up to unhealthy peer pressure
• Avoid drug and alcohol abuse
• Save sex until marriage
• Desire their father’s counsel
• Admit when they’re wrong
• Come to their dad in times of trouble or hurt
• Admire and respect their father as their parent

Josh McDowell is a popular Christian apologist, evangelist, and writer whose landmark best-selling books include More Than a Carpenter, Evidence That Demands a Verdict, and Right from Wrong. He and his wife Dorothy have four grown children and live in Dallas, Texas.