Look Inside
According to Your Word
Morning and Evening Through the New Testament, A Collection of Devotional Journals 1940-1941
By: Stephen Olford
Publisher: Broadman & Holman
Category: Devotionals 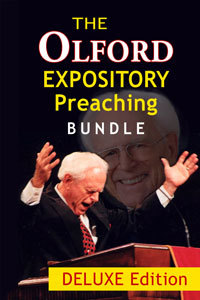 Late pastor Stephen Olford, often called "the preacher’s preacher" and a great influence upon Billy Graham, was just twenty-two years old in 1940 when he began a unique devotional study of the New Testament. Living in Wales amidst the intense turmoil of World War II, Olford commenced reading and writing every day and night about each chapter from Matthew 1 through Revelation 22.

Nearly seventy years later and four years after his passing, Olford’s quiet time notes are gathered in According to Your Word, a remarkably focused collection of 260 devotions that are uncommonly passionate, historical, and sure to inspire all who will read them now.

Stephen F. Olford (1918 - 2004) was an internationally known minister, born in Zambia and serving churches in England and the United States. Often called the preacher's preacher, he influenced countless lives and pioneered the Encounter radio program and Olford Ministries International, both of which continue today.

Unquestionably one of the most refreshing radiant Christians I have known.