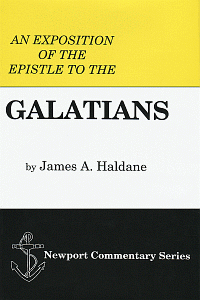 Look Inside
An Exposition of the Epistle to the Galatians
Showing that the Present Divisions Among Christians Originate in Blending the Ordinances of the Old and New Covenants
By: James A. Haldane (Author)
Publisher: Particular Baptist Press
Category: Commentaries

This Exposition of the Epistle to the Galatians by James A. Haldane was first published in Edinburgh, Scotland in 1848, and was well stated by his biographer to be a "volume in which, as in all his writings, there are many delightful and edifying views of Divine truth, and many valuable illustrations of the connections between the Old and New Testaments." As Haldane writes in the Introduction to this fine commentary, the Epistle to the Galatians is "peculiarly valuable" for the "luminous view it affords of the cardinal doctrine of justification by the righteousness of Christ, appropriated by faith."

Haldane's stated desire in writing this commentary on Paul's epistle was that it might "prove useful in leading any of the Lord's people to a more diligent study of the Scriptures, and to a clearer understanding of the relation of the old and new covenants." What makes Haldane's Exposition of Galations unique among all others is it major premises-that in confusing and even mixing the Old Covenant with the New, many Christians have been led astray not only on Law and Grace, but in the very nature of the New Testament church and her ordinances. "This epistle," wrote Haldane, "and that to the Hebrews, contain a full exposition of the Mosaic dispensation, and its relation to the kingdom of Christ. Had these epistles been understood, the corruption of the Gospel, and the ordinances of Christ, would not have taken place; but in them and the rest of the New Testament, a highway is prepared for the followers of Jesus to retace their steps, and to be guided by "the pattern showed to them in the mount," where the voice from the excellent glory proclaimed, "This is my beloved Son, Hear Him!"

This fine exposition is appended with other good works by Haldane directly relating to these important subjects, including that which relates his own spiritual journey to a solid New Testament foundation.

James Alexander Haldane was born in Dundee, Scotland on July 14, 1768. After a few years study in Edinburgh University, he commenced a maritime career in the service of the East India Company in 1785. Ten years later he and his wife decided to settle in Edinburgh, where shortly after he was converted to faith in Christ through the instrumentality of an Independent minister, David Bogue. In 1797 he began his first preaching tour through the north of Scotland. Though at the time still a member of the Church of Scotland, Haldane began to question and challenge the established Church, disregarding parish lines and encouraging itinerant evangelism. By 1799 he had moved away from Presbyterianism and received ordination as pastor of an Independent congregation meeting at the former Circus building in Edinburgh known as the "Tabernacle." In reviewing both doctrine and polity in the light of the Bible and through the influence of the writings of the Scottish Baptist Archibald MacLean and Lachlan Macintosh, James Haldane came to embrace Baptist views and was scripturally baptized in the spring of 1808. For 50 years Haldane ministered at the new Tabernacle in Edinburgh, built for him by his brother Robert, and opened in 1801. James Haldane died on February 8, 1851.