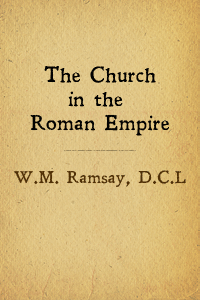 Look Inside
The Church in the Roman Empire
Before A.D. 170
By: William Mitchell Ramsay (Author)
Publisher: Wordsearch
Category: History & Culture

The Church in the Roman Empire is based on William Ramsay's 1892 lectures at Mansfield College in Oxford. Ramsay, an archaeologist and scholar, followed the apostle Paul's travels described in the book of Acts, discovering along the way that his archaeological findings supported Act's account. Taking us along on the journey, this volume examines the early history of the church.