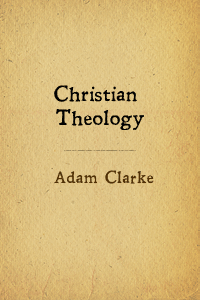 Look Inside
Christian Theology
With a Life of the Author
By: Adam Clarke
Publisher: Wordsearch
Category: Theology

"For some years before the lamented death of Dr. Clarke, he was repeatedly solicited to collect his rich and ample materials, and give to the world a Biblical Dictionary; and Theological Institutes, or a System of Christian Theology, in one or two portable and cheap volumes. He acknowledge that each of these was a great desideratum. He felt strongly inclined to prepare them, and even made a beginning. In one of his letters he writes:—"I have laid the foundation of a Biblical Dictionary." In another he says:—"I may possibly write some Institutes; but I shall put my Homer into a nutshell." On another occasion he observed: "If you were stationed in the south, and would assist me, I could do many things, but my eyes will not now bear any intense application." Such an appointment never took place; and before the worthy doctor had proceeded far, he was called hence. Had he accomplished his object, he would doubtless have produced a volume deserving a place in every Christian library. If it be inquired what induced me to attempt to supply his lack; I answer, my strong affection for the man; my high admiration of his writings; my deep conviction that such a volume would probably prove a blessing to many; and I may perhaps, in proof of the doctor's confidence and affection, be allowed to refer to the following passage in one of his letters, which to me is sufficiently affecting: "O that my strength were as in days that are past! While writing, it seems as if whispered to me, 'Your time is at hand—Samuel Dunn shall be your proxy in my work.' This is enough!" Though painfully conscious of great inability, I have "done what I could." Others will judge of the manner in which the part of selecting and systematizing has been executed. That this manual will be found useful for the purpose of reference, to those individuals who possess the doctor's other works; and that those who possess them now will be induced, from this specimen, to procure them as soon as possible, is , perhaps, not an unreasonable expectation. The unrivaled Commentary, which is now in course of publication in an elegant and cheap form,—with "multitudinous emendations and corrections from the author's own and last hand,"—I should like to see in every family, from the Norman to the Shetland Isles.

While I indulge the hope that the short Life in this volume will be acceptable to many readers, I have great pleasure in stating that Mrs. Smith, of Stoke Newington, the amiable and accomplished "member of the family," to whom the public is so greatly indebted for the preservation of such valuable materials, is preparing a cheap edition of the life of her distinguished father."

About the Author
Adam Clarke was born in Ireland in 1762. Clarke became a Methodist in 1778. In 1782, he was appointed to his first preaching circuit in Bradford, Wiltshire. He served in various places and traveled throughout Great Britain, while achieving fame as a preacher and serving as president of the British Conference in 1806, 1814, and 1822.

After 1805, Clarke served as a member of the committee of the British and Foreign Bible Society and worked as an adviser of its Oriental publications. He resigned from this task in 1819, having retired four years previously, due to his impaired health. Clarke was also active in the service of the Wesleyan Missionary Society from its inception in 1814, making two missionary journeys between the years of 1826 and 1828 to the Shetland Islands.

The most important of his numerous works was his Commentary on the Bible, originally published in eight volumes, which had a long and extensive circulation and took Clarke over four decades to produce. He also published a Biographical Dictionary in 1802, and its supplement, The Biographical Miscellany in 1806. His Miscellaneous Works were edited in thirteen volumes by J. Everett.

Adam Clarke died in London on August 28, 1832. He is perhaps the most famous Methodist/Wesleyan commentator to date.