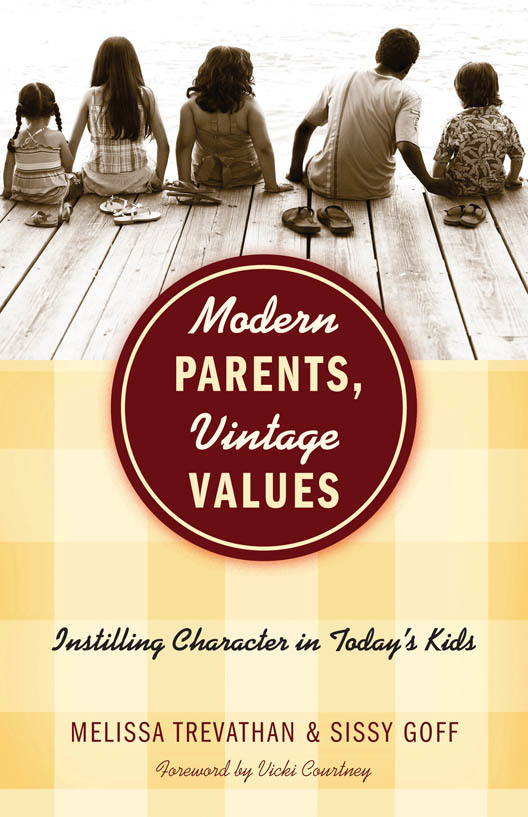 What do I do when my son learns phrases in school that he's not allowed to say at home?

How do I teach my daughter caution but not fear?

How do I teach my daughter about gratitude when she believes she is entitled to a cell phone and a laptop and everything else that not only she wants, but that all of the kids around her already have?

Melissa Trevathan and Sissy Goff hear these types of questions and many other comments from parents on a daily basis in their counseling office and at ministry events. Today, more than ever before, we live in a culture that is at war against our parenting. Between the internet, the media, the sense of entitlement that kids are living with, the disrespect . . . it is almost too much. We often wish we could move back to Mayberry, where our biggest concern was who had set off the firecrackers in the neighbor's garage. While those aren't the issues most parents are facing today, Melissa and Sissy believe we can still raise children who value, well, values. They provide a clear and possible path back to cultivating children who have a sense of character and groundedness, who may not be as rampant across playgrounds and parks as they once were. They paint the picture of how to raise children with manners and kindness and with a healthy sense of fear and respect both for their world and the adults around them--and to do so without totally disengaging from the realities of today's world. In short, they believe it is still possible to instill vintage values in modern kids.

Modern Parents, Vintage Values talks about the specific issues facing kids today, helping parents to more fully understand the challenges being faced. Yet Melissa and Sissy don't stop there. They focus in on nine values that are foundational for the character development of children: kindness, integrity, manners, compassion, forgiveness, responsibility, gratitude, patience and confidence. Each chapter is broken down into a section for children and adolescents, and specific ways to foster the specific value for the particular age. Modern Parents, Vintage Values offers parents timeless truths that can break through the chaos of today's culture and instill these truly vintage and important values in kids.

Melissa Trevathan, M.R.E. first became a youth director at the age of 16. Since that time, she has been a teacher, retreat leader, head of spiritual life at a private school in Nashville, and is now founder and Executive Director of Daystar Counseling Ministries that began in 1985. Melissa has spoken across the country, including teaching graduate courses in counseling adolescents and has been a guest on television and radio programs throughout the United States and in Canada. She coauthored The Back Door to Your Teen's Heart, Raising Girls, Mirrors and Maps, and Growing Up Without Getting Lost. She is a regular speaker at LifeWay's You and Your Girl events as well as a popular speaker for parents and kids of all ages.

Sissy Goff, M.Ed., LPC-MHSP has worked as the Director of Child and Adolescent Counseling and the Director of Summer Programs at Daystar since 1993. She also has been a guest on television and radio programs across the United States and in Canada. A sought after speaker to parents and girls of all ages, Sissy is also a regular speaker at LifeWay's You and Your Girl events. She has written for CCM Magazine, ParentLife magazine, and a variety of other periodicals. She and Melissa Trevathan coauthored The Back Door to Your Teen's Heart, Raising Girls, Mirrors and Maps, and Growing Up Without Getting Lost.

This is it! The book I've been waiting for as a mom! Modern Parents, Vintage Values answers every question I've thought about as a concerned and invested parent, giving practical and biblical solutions to each situation...today, my life just got a little easier. I need 2 copies of this book--one for my nightstand and one for my purse

This book refreshes a parents heart and gives them permission to return to what God meant us to spend our time doing all along; instill virtues into our children. You'll love the practical ideas! I did.