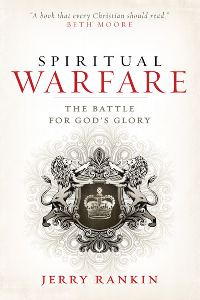 Christians already have victory over the world through Jesus, but Satan picks a fight with believers nonetheless, using earthly temptations and trails in an effort to steal God's glory. Indeed, the battle rages on, but the nature of the enemy is baldly exposed in Spiritual Warfare, helping us better understand and process feelings of resentment, anger, doubt, pride, and adversity for what they really are: fiery darts of deception.

Written by International Mission Board president Jerry Rankin, who has witnessed spiritual warfare at work firsthand around the world for decades, this book is ultimately an inspiring guide to the Spirit-filled life. Rankin clearly and lovingly illuminates the spiritual disciplines that equip us for victory against Satan including prayer, Bible study, fasting, Sabbath observance, active church membership, and praising God in all things.

Jerry Rankin and his wife, Bobbye, spent twenty-three years as missionaries in Asia until he became International Mission Board president in 1993. He now leads the IMB with a vision of missionaries, churches, and volunteers partnering to take the gospel to all people. Rankin earned a bachelor’s degree from Mississippi College and his master of divinity from Southwestern Baptist Theological Seminary. The Rankins live in Richmond, Virginia.

Too many works about spiritual warfare are more about Satan than God, more about anecdote than the Bible, and more about power displays than Christian discipleship. This book will likely stretch you--perhaps even to points of disagreement at times--but it takes you to the bottom line of victory in spiritual warfare: living daily in the power of God. Read this book, and learn from a man who longs for the entire world to know this Christ-centered victory.