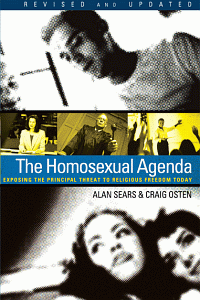 In The Homosexual Agenda Alan Sears and Craig Osten expose the goals of the homosexual movement and its rising legal activism. The homosexual agenda has as its primary aim to "trump" the rights of all other groups, especially those of people of faith. Sears and Osten provide well-documented proof that American is not only becoming more tolerant of homosexual behavior, it is becoming less tolerant of those who disagree with the lifestyle.

Alan Sears is the president, CEO, and general counsel of the Alliance Defense Fund, an organization dedicated to the defense of religious freedom, the sanctity of human life, and traditional values.

Craig Osten is the Vice-President of Creative Services for the Alliance Defense Fund.

The Alliance Defense Fund...is doing a wonderful work in defending religious liberty and preserving the rights of Christian people.