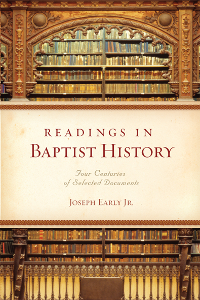 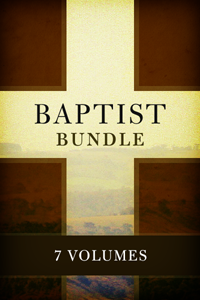 Readings in Baptist History compiles four centuries of the the most notable religious documents from the Baptist tradition in a single setting, from John Smyth's "The Character of the Beast" in 1609 all the way up to the 2000 revision of the Southern Baptist Convention's "Baptist Faith and Message." This primary source Baptist history volume can be used as a first-rate companion to larger history texts or stand strongly on its own.

Also featured are Thomas Jefferson's "Letter to the Danbury Baptist Association," letters from missionary Lottie Moon, "Letter from the Birmingham Jail" by Martin Luther King Jr., and new writings on the modern resurgences of both conservatism and Calvinism.

The most significant sourcebook on Baptists since Leon McBeth's book of readings in 1991. Helpful notes and indexes make the compilation even more useful. A necessary and valuable addition to the libraries of pastors, students, and Baptist historians.

Early has done a superb job in revising this collection of primary Baptist sources. I confidently expect a renewed life and usefulness for these documents. They will enrich the lives of countless students and other serious readers in years to come.