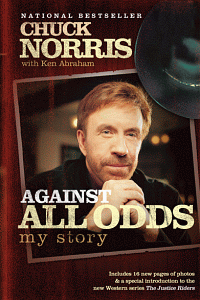 Look Inside
Against All Odds
My Story
By: Chuck Norris with Ken Abraham
Publisher: Broadman & Holman
Category: Literature, Biographies

Millions of people worldwide know Chuck Norris as the star of more than twenty motion pictures, a martial arts expert, and the only man in the Western Hemisphere to hold an eighth degree Black Belt Grand Master in Tae Kwon Do.

Countless others see him daily in syndicated reruns as the hero of the longest running CBS series to date, “Walker, Texas Ranger.” What many don’t know is that Chuck Norris is a sincere Christian–a man whose faith plays a role in everything he does.

Against All Odds is the inspirational story of how Norris overcame abject poverty from childhood, the effects of his father’s alcoholism and desertion of the family, and his own shyness and lack of strength and ability early in his life. Norris writes candidly about the past and gives God full credit for where he is today.

Chuck Norris is a legendary film and television actor best known for his popular series Walker, Texas Ranger, now in syndication to millions worldwide. He is also a martial arts expert, an active humanitarian and founder of KICKSTART, and author of the New York Times best-selling autobiography Against All Odds. Norris also writes a column that appears in Human Events, Town Hall, and World Net Daily, among other outlets. He lives with his wife Gena and their children near Houston, Texas.

The facts of Norris's life make this book compelling.