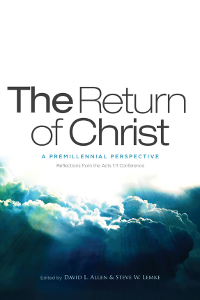 In the study of end times (eschatology), evangelical Christians usually adhere to one of three positions. Premillennialism holds that Christ will return to earth before He reigns over an earthly kingdom for one thousand years. Postmillennialism says the kingdom of God will become realized on this earth through the church's influence, even before Christ's return. Amillennialism suggests the millennium is not a literal thousand-year reign, but that Christ's return will usher in eternity.

The Return of Christ gathers presentations from the Acts 1:11 Conference where church leaders spoke in support of the premillennial position and pre-tribulation rapture. Regardless of whether or not a reader holds this same position, the text emphasizes the deep importance of eschatology in Christ's teaching ministry and as the focus for our hope. Indeed, without the promise of Christ's return, Christianity has little to offer the unbeliever.

David Allen is dean of the School of Theology, professor of Preaching, and director of the Center of Biblical Preaching at Southwestern Baptist Theological Seminary in Fort Worth, Texas.

Steve Lemke is provost and professor of Philosophy and Ethics at New Orleans Baptist Theological Seminary.

An expert treatise on futuristic premillennialism. The doctrine of "last things" occupies a significant portion of Scripture and deserves serious study. This particular treatment of the eschatology passages contained within both Testaments is surely of immense value to theologians and pastors alike. These men have rightly divided the Word of truth and will certainly stand as workman approved before God.