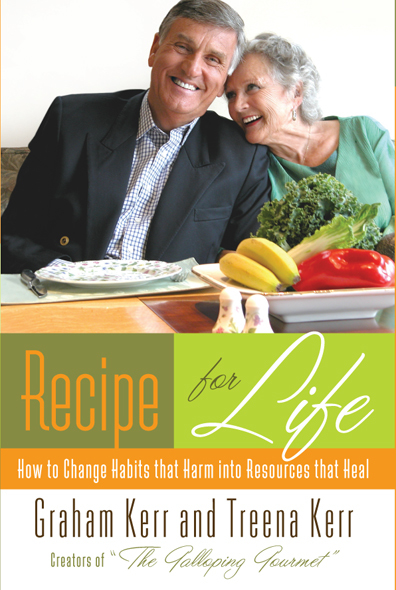 Look Inside
Recipe for Life
How to Change Habits That Harm into Resources that Heal
By: Graham Kerr and Treena Kerr
Publisher: Broadman & Holman
Category: Literature, Christian Living

“Galloping Gourmet” Graham Kerr and his wife Treena have spent the past twenty years embracing a Christ-like lifestyle they call outdulgence. Here, the Kerrs share the transforming details of such a truly good life that trades constant consumption and self-serving for creative simplicity and healthy self-denial to benefit others. A deep and delightful approach to what Jesus described when He said, “I have come that they may have life and have it in abundance.”

Graham Kerr was born in London, England, and developed his famous "Galloping Gourmet" television series in New Zealand, Australia, and Canada before it was distributed to a worldwide audience of two hundred million. He is a landmark chef, best-selling author, and a former Youth With A Mission missionary, ordained elder, and pastor now dedicated to full-time ministry with his wife Treena.

Treena Kerr was born in Dover, England, and pursued an early career in professional theater. An Emmy-nominated producer and published poet, she now serves in full-time ministry wit her husband to whom she has been married for fifty years. The Kerrs now live in Washington State.