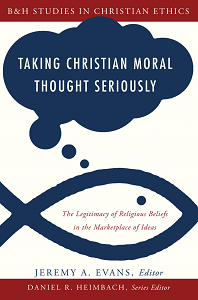 The Death Penalty, Environmentalism, Public Reason, Voting, Abortion. Where does Christian faith belong in discussions about these issues? In Taking Christian Moral Thought Seriously, editor Jeremy A. Evans establishes that separation of church and state is not a principle of the United States Constitution (or any other founding document). Thus, there should be a social interest in not hindering any religious person’s full participation in the American marketplace of ideas. As such, Evans addresses readers from both the Christian and non-Christian communities through the related scholarship here, knowing either side’s failure to consider one’s well-prepared thoughts in science, politics, and education undermines the very idea of seeking the truth.

Topics include: * The death penalty * John Rawls’ theory of public reason * Whether or not a non-voting stance is permissible for Christians * Religious disagreement and its impact on the justification of religious beliefs * How the current models of scientific explanation are not incompatible with religious beliefs * Creation care—what is our responsibility to the environment? * Are theologians and philosophers missing the point on the abortion problem?

This is a long-overdue book. Although there are scores of accessible books written by Christian philosophers addressing traditional topics, such as God’s existence, the problem of evil, and the miraculous, few have broached the areas of ethics, public reason and science while critically and respectfully engaging the most influential philosophers writing on these subjects. Professor Evans has managed to put together such a book. It is a model of clarity without sacrificing philosophical rigor. It is the sort of book that should be in the hands of any Christian desiring to engage the wider culture in an informed and thoughtful manner.