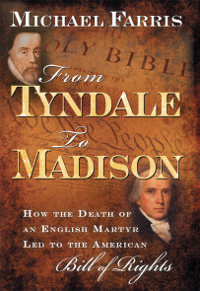 Look Inside
From Tyndale to Madison
How the Death of an English Martyr Led to the American Bill of Rights
By: Michael Farris
Publisher: Broadman & Holman
Category: History & Culture

From Tyndale to Madison is a sweeping literary work that passionately traces the epic history of religious liberty across three centuries, from the turbulent waning days of medieval Europe to colonial America and the birth pangs of a new nation.

With literally a cast of thousands, the tapestry of world history is on display here. From the remarkable translation work of William Tyndale to the court intrigues of Henry VIII and Thomas More, the battle for the English Bible culminates in the venerable King James Version. Also detailed is the spread of the Reformation through the eyes of Martin Luther, John Knox, and John Calvin—in their own, often surprising words.

Readers witness the anguish of religious dissenters under the oppressive reign of Bloody Mary and the first sparks of liberty with the rise of Oliver Cromwell and the English Commonwealth. One hundred years later, across the sea, James Madison, Patrick Henry, and Thomas Jefferson fight to establish a bill of rights that will guarantee every American citizen the "free exercise" of their religion.

Without sugarcoating either side of the story, author Michael Farris&#151a constitutional lawyer who regularly defends religious freedom on Capitol Hill— shares eye-opening historical details regarding sacrifices people made then to secure the inalienable rights we enjoy today.

"We must tell the story of the Christian persecutors, so that we can put to the test the claims that people who cared little about faith and religion were the heroes of liberty. The true heroes are not found among the salons of the Enlightenment philosophes, but in the cells in King's Bench Prison and tied to the stake at Smithfield."

This is their incredible story.

Michael Farris is chairman and general counsel of the Home School Legal Defense Association and chancellor of Patrick Henry College where students are trained to impact the world “for Christ and for Liberty.” He is a constitutional lawyer, a leading pro-family activist on Capitol Hill, and an ordained minister whom Education Week named among the “Top 100 Faces in Education.” Farris and his wife have ten children and ten grandchildren.

A tour de force of extraordinary and unusual importance. Only rarely does a book possess the significance of From Tyndale to Madison. Michael Farris meticulously and successfully debunks the myths that the Enlightenment is responsible for the American Bill of Rights and that Enlightenment philosophies were chiefly responsible for opening people's minds to the error of religious persecution and paving the way for a society in which 'heretics' are not tortured and burnt in town squares. A 'must read' for everyone interested in liberty.

In this exciting history, Farris traces the story of how familiarity with the Bible and the faith it inspires is what really produced the religious freedom that is the bedrock foundation of our country. Once I began reading it I could not lay it down. I heartily recommend this book to anyone who would know the truth about the history of America!

One of the most thoughtful and helpful volumes in recent generations...I wish that every member of the congress and the judiciary, together with every pastor in America, would read this volume and apply it to their life and work.