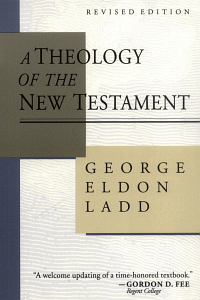 Ladd's magisterial work on New Testament theology has well served thousands of seminary students since its publication in 1974. Enhanced and updated here by Donald A Hagner, this comprehensive, standard evangelical text now features augmented bibliographies and two completely new chapters on subjects that Ladd himself wanted to treat in a revised edition--the theology of each of the Synoptic Evangelists and the issue of unity and diversity in the New Testament—written, respectively, by R. T. France and David Wenham.

George Eldon Ladd (1911-1982) was professor of New Testament exegesis and theology at Fuller Theological Seminary, Pasadena, California. His many other books include The New Testament and Criticism, The Gospel of the Kingdom, and A Commentary on the Revelation of John.

Donald A. Hagner is the George Eldon Ladd professor of New Testament at Fuller Theological Seminary.

R.T. France is a former principal of Wycliffe, Oxford.

A welcome updating of a time-honored textbook.