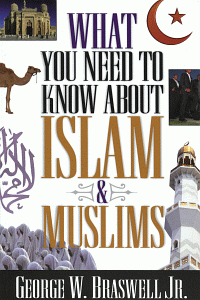 Look Inside
What You Need to Know about Islam and Muslims
By: George Braswell
Publisher: Broadman & Holman
Category: Literature, General

With insight into the beliefs, social lives, family structures, and missionary strategies of the Islamic faith, this important new book offers a unique perspective to help you know and understand Islam's influential beliefs and practices.

Writing from a western Christian viewpoint coupled with a detailed, first-hand knowledge of Muslim life, Dr. Braswell digs beneath the religion's seemingly harmless surface to reveal a rich, proud, and powerful force in world affairs. With a glossary of special terms, maps of worldwide Islamic expansion, and a bibliography for further study, this book provides both a complete introduction and a comprehensive reference tool on Muslims—where they started, how they're positioned in today's social, political, and religious arenas, and where they're heading in the 21st century.

George W. Braswell, Jr. is a professor of missions and world religions and serves as director of the D.Min. program at Southeastern Baptist Theological Seminary. A resident of Wake Forest, North Carolina, he is the author of several books including Understanding World Religions and Islam: Its Prophet, Peoples, Politics, and Power.