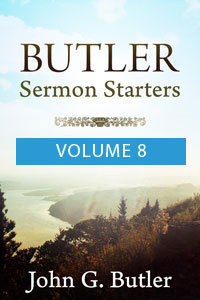 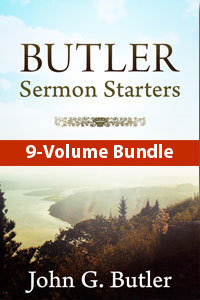 Butler calls these "sermon starters," but they are far more than that. Each concentrates on a single Bible verse and contains an outline of four to six crisply alliterated sermon (or lesson) points as only John Butler can do. With each alliterated point, Butler offers us a paragraph or two of concentrated material. These are not full-blown sermons, but they are carefully written, containing only the distilled material that you will actually use.

Most speakers may wish to personalize the sermon starters and use their own illustrations and outlines. They simply need a “starter” and that is what these Sermonettes are intended to be.

John G. Butler has been a Baptist minister for over half a century with "pastorates in Williamsburg, Ohio; Detroit, Michigan; Chicago, Illinois; and Clinton, Iowa. He is a veteran of the United States Navy, attended Tennessee Temple University and graduated from Cedarville University. Butler is also the author of the Bible Biography Series —a twenty-seven volume series about major Bible characters; the Studies of the Savior —a ten volume series about Jesus Christ; and Daily Bible Reading—a unique four volume devotional series that emphasizes expository Bible study.