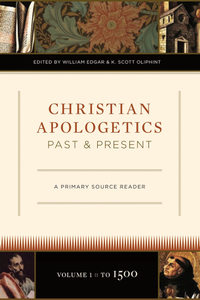 An unprecedented anthology of apologetics texts with selections from the first century AD through the Middle Ages. Includes introductory material, timelines, maps, footnotes, and discussion questions.

The apostle Peter tells us always to be ready to give a defense to anyone who asks us to account for our hope as Christians (1 Peter 3:15). While the gospel message remains the same, such arguments will look different from one age to another.

In the midst of a recent revival in the field of apologetics, few things could be more useful than an acquaintance with some of these arguments for the Christian belief through the ages. This first of two proposed volumes features primary source documents from the time of the early church (100-400) and the Middle Ages (400-1500). Featured apologists include Aristides, Justin Martyr, Irenaeus, Tertullian, Origen, Athanasius, Augustine, Anselm, and Thomas Aquinas.

The authors provide a preface to each major historical section, with a timeline and a map, then an introduction to each apologist. Each primary source text is followed by questions for reflection or discussion purposes.

About the Editors:
William Edgar (DTheol, University of Geneva) is professor of apologetics and John Boyer Chair of Evangelism and Culture at Westminster Theological Seminary. William lives in Philadelphia, Pennsylvania, with his wife, Barbara. They have two children and three grandchildren.

K. Scott Oliphint (PhD, Westminster Theological Seminary) is professor of apologetics and systematic theology at Westminster Theological Seminary in Philadelphia and has written numerous scholarly articles and books, including God With Us. He is also the co-editor of the two-volume Christian Apologetics Past and Present: A Primary Source Reader and Revelation and Reason: New Essays in Reformed Apologetics.

Bill Edgar, one of evangelicalism’s most valued scholars and apologists, has given us in this work with Scott Oliphint a classic destined to be used for generations. I highly recommend it to all who are called to defend the faith.

This collection is superbly done and will bring much needed wisdom to our own times.

Edgar and Oliphint have skillfully selected the best pre-Reformation sources. Their volume, the first of two, fills a gap in scholarly resources and highlights the strength, wisdom, and solidity of defenders of the faith in earlier times.